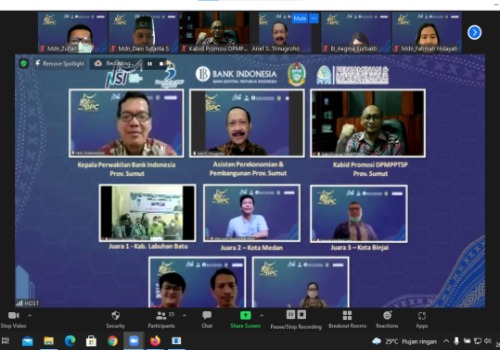 The announcement has passed a series of events starting from kick-off activities on May 4, 2021, Capacity Building on May 19-21, 2021, Coaching Clinic by the jury on July 16, 2021, the selection stage of the top five and presentation on August 13, 2021, until the day of the announcement the winner one to five. The announcement was held virtually which was also attended by the Head of Bank Indonesia Representative of North Sumatra Province, Soekowardojo, and Assistant for Economy and Development of North Sumatra Province, Arief Sudarto Trinugroho.

On that occasion Arief Sudarto Trinugroho expressed his appreciation to the top five selected regencies / cities, namely Binjai City, Karo Regency, Labuhanbatu Regency, Medan City, and Pematangsiantar City. The five regencies / cities should be proud because they have entered into the top five regions with preliminary study documents of the best investment projects and are expected to be role models for other regions in preparing investment projects that are ready to be offered, so that other regions in North Sumatra can actively participate again and become winners in the next activities.

The announcement of the winner of NSI-BPC 2021 was led directly by the Head of Representative of Bank Indonesia of North Sumatra Province by establishing Labuhanbatu Regency came out as the first winner, Medan City as the second, Binjai City in the third position, Pematangsiantar City as the fourth, and Karo Regency as the fifth winner.

The Head of Bank Indonesia Representative of North Sumatra Province, Soekowardojo, through his speech and appreciation expressed his congratulations on the hard work and collaboration that has been built so far with the Local Government in North Sumatra. It is hoped that through NSI-BPC 2021 competition can encourage the seriousness of North Sumatra Province in increasing the realization of regional investment where the investment sector is one of the urgent indicators in driving the economy in North Sumatra. Coupled with abundant resources, easy access to raw materials, and a demographic structure dominated by productive age, so the hope is that the investment sector in North Sumatra can continue to be developed to achieve optimal economic recovery.