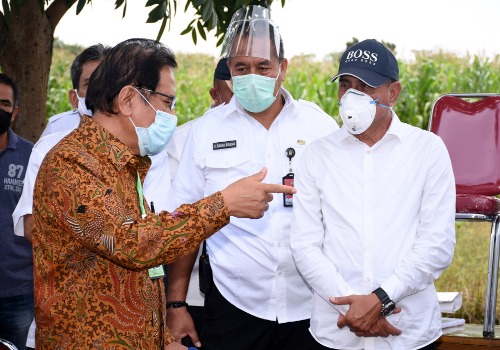 The Minister of ATR Reviewed Location of Sport Center; Edy Rahmayadi Mentioned It Would Be Made a New City in Deli Serdang

The Minister of ATR Reviewed Location of Sport Center; Edy Rahmayadi Mentioned It Would Be Made a New City in Deli Serdang

In that observation, Governor Edy Rahmayadi directly explained  the plan of development project would be carried out on two land areas, 92.8 hectares (Ha) of land for Sport Center facilities and 7.02 Ha of land for business centers. According to the Governor, this area would be developed being a new city in Deli Serdang.

In its construction, (Mr) Edy Rahmayadi mentioned, the international standard sports facilities area will be passed by the Integrated Railroad and MRT line. This purposes to anticipate traffic congestion and also will be done the widening of public roads in this area.

Meanwhile, the Minister of ATR / Head of BPN (Mr) Sofyan Djalil expressed his support for the construction of Sport Center and asked to Governor (Mr) Edy Rahmayadi to supervise the development process right away. It is hoped that all buildings and other constructions could be sturdy and last long.

"I strongly support the development and the discourse of Governor to build this new city here. The main thing must be supervised in the development right away is about all buildings are sturdy and strong for a long time ahead, " mentioned by (Mr) Sofyan Djalil, while asking the Head of the BPN of North Sumatra Province (Mr) Dadang Suhendi to complete the administration of the land handover immediately.

While the Head of the Youth and Sports Board of North Sumatra Province (Mr) Baharuddin Siagian mentioned that in this time 4 years the North Sumatra Provincial Government would be completed the construction for Sport Center. He mentioned, in the middle of the location would be built the main stadium with capacity of 75,000 spectators with the creative design like a palm oil-shaped stadium building.

"The step that we would be done first is to conduct socialization to replace plants and buildings on it, because there have tenants right there. Furthermore, we would be planned for development gradually which is starting from 2021, " (Mr) Bahar mentioned.